After my 8 yr old daughter saw the very cool Lego army that Rebel Minis posted on their blog, she wanted to do the same thing with Lego knights.

But while we waited to find deals on lego people, I remembered I had bought some 2.5D tanks & dinosaur models recently. They're made out of styrene pieces that you punch out of a card like the Wizkids' Pirates of the Spanish Main ships. Here are scans of the inserts that came in the packs. There's quite a range of model types. 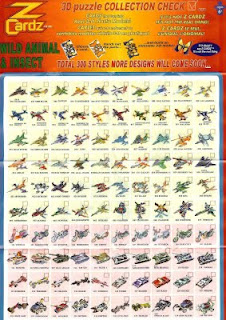 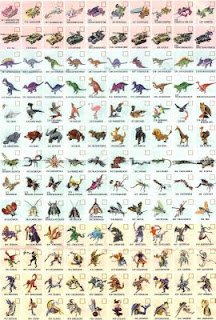 Unfortunately, the website listed on the packs (www.z-cardz.com) goes to an Asian language site with no English info at all. So I can't help track down any of the models.


I had 5 packs of tanks & 1 pack of dinosaurs which I quickly snapped together & came up with some rules off the top of my head.

Here's the inital board lay out, & the yellow vs green forces (2 dinos, 2 tanks & 2 smaller tank destroyer vehicles each). 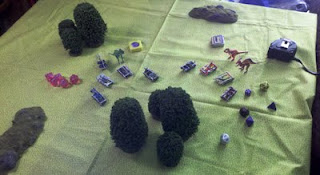 Here's a closeups of my daughter's force 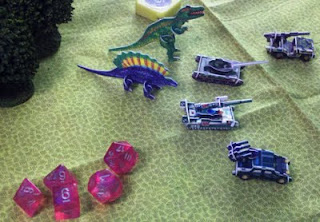 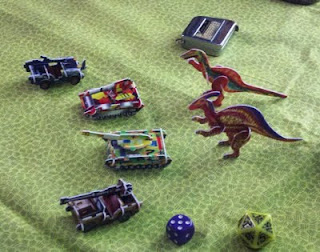 The rules were very simple, but it did include measuring for movement & ranged fire (the dinos had a very short but very powerful fire breath), opposed die rolls to resolve combat, & different sized dice for the different figure types (tank destroyers = d6, tanks = d10, dinos = d20).

She started off very well with her forces hidden behind the woods. She asked if we could move or see through the woods & I said no to make it simple. She also told me which of the dinos were meat eaters & which were plant eaters, & that the meat eaters should be better fighters. I suggested we have all the dinos be the same for now.

She ended up wiping out all my vehicles at one point. Here is a picture of her forces converging on my 2 remaining dinosaurs. 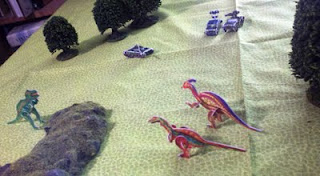 & another of her TRex coming over the hill to flank my dinos. 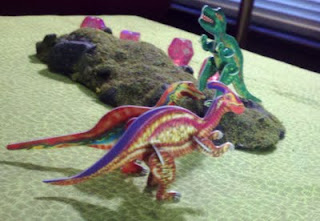 Unfortunately, the dino attack die of d20 was just too much for the tanks' d10 & tank destroyers' d6 & my dinos started quickly knocking off her vehicles. Seeing that she was getting disappointed, I "accidently" started rolling a d12 for the dinos instead of a d20, & allowed her to roll 2d6 for her tank destroyers when they fired at the same target.

She finally (luckily) beat me & ran off to tell Mom about her glorious victory. I was very happy she enjoyed it & was very active in wanting to play the game, doing her own measuring & making her own tactical decisions.

At the end of the game, she asked me if I could "put the game on Facebook". I was quite surprised since she's never mentioned Facebook before & only uses computers to play cartoon games like on Disney & Nick Jr. But this blog is as close as I get to Facebook, so it'll have to do. Now I need to go write down the rules I came up since I know she'll start correcting me next time we play if I don't. 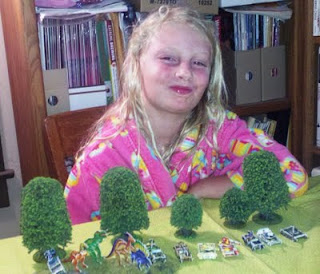 Posted by Black Cavalier at 7:53 PM

Email ThisBlogThis!Share to TwitterShare to FacebookShare to Pinterest
Labels: Gaming with Kids