Dungeon in a Box

Since there might be a few questions, I wanted to review my dungeon making process. I was directly inspired by OldBen1’s excellent “dungeon/house in a box idea”: Joseph Curwen House, LotR Dungeon.

Since we recently moved & had a bunch of banker’s boxed left, I used those as the frame for the larger rooms. The medium sized room is 1 banker box, & the altar room is 2 boxes side by side with 1 side cut off. 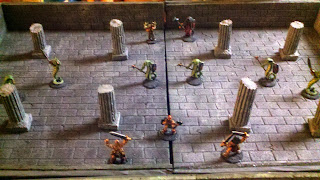 The smaller entry room was a picture storage box from Michael’s. 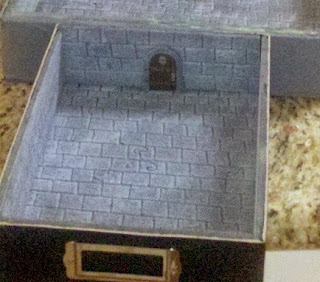 The floors and walls are made from a thin insulation foam called GreenGuard. I got some from a gamer friend who works construction, but I’ve not been able to find it in a retail store yet. The foam is about 1/4" & has a thin film on both sides. 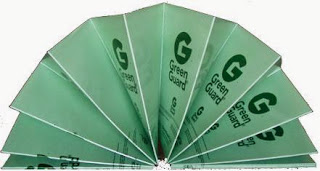 I peeled the film off 1 side & used a dull pencil to draw the brick patterns and designs. The foam is dense enough that it’s easy to draw on and holds the marks well. The foam is denser than normal foam core and cuts a lot easier. I’ve found similar thin insulation foam on the websites of big name home improvement stores, but I've heard that foam isn't as dense. I haven't checked this myself.

I put a quick layer of white glue on the foam to seal it & then spray painted it grey followed by lots of drybrushing. I used double-sided carpet table to tape the foam into the cut down boxes.

The altar and grate in front of it are also made out of the GreenGuard, so the possibilities of further dungeon detailing like custom doors, pit openings, archways, etc. are endless. 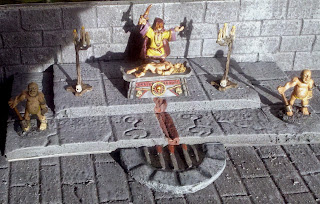 The doors that I used were from Mage Knight Dungeons.

& finally, one of the nice things about using these boxes to build the dungeon is that they already have lids, so they’re very easy to store. Here are all the rooms boxed up. 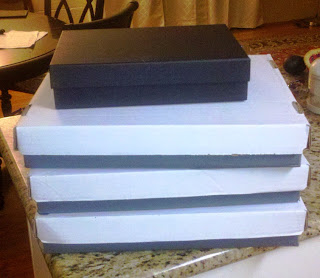 Posted by Black Cavalier at 1:30 PM