What is best in life? To crush your opponent, see their dice driven before you, and to hear the lamentation of their figures. Will your non-IP Infringing fantasy heroes save the girl before the evil magician can enact his nefarious plan?

I ran a game of Crom at our local gaming convention, a fantasy skirmish game based in the Conan the Barbarian world. The rules are from Matakishi, of Matakishi's Tea House, and can be purchased from Wargames Vault.

It was a classic story of thieves steal jewel, brag too much in tavern, get thrown in jail, & get made an offer they can’t refuse. The magistrate’s daughter was captured by Snake Cult: Local #623, so the jewel thieves were offered amnesty for their crimes if the daughter was saved. And off they went to find said cult.

The party was made up of Krognar, Sandor (no relations to the Westeros Cleganes), Gutrecha and Dave the Barbarian. They moved stealthily up on the Snake Cult’s outpost. 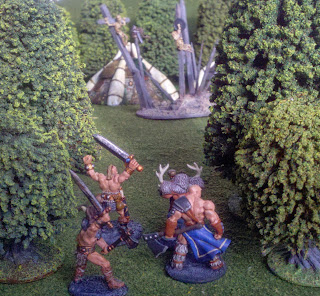 The party encountered some guards on the outskirts of the camp which they quickly dispatched.

They moved towards the Cult’s huts in which they had to find a key to open the temple’s main door. But more cultists came pouring out of the huts and the party met the Death Dealer. 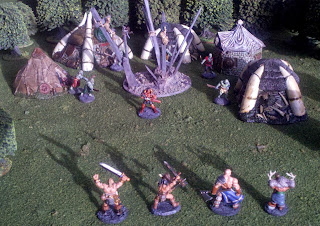 They overcame the final resistance, but Gutrecha was finally killed with dead cultists piled all around him. 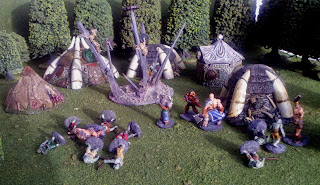 Luckily the rest of the party found the key, and released another hero, Gonad, that had been the Cult’s captive (conveniently replacing Gutrecha). So, healed up and ready to go, the party delved into the depths of the Snake Temple.


Once inside the temple, the party was immediately attacked by more cultists, and they were able to handle them easily. 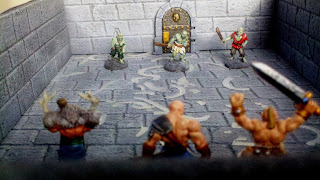 But the party noticed a number of very large snake skins lying around the room, which made them very cautious.

Advancing into the next room, they found the skins' owners. And found that they were noticeable tougher than the generic cultists. 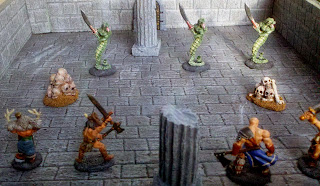 They still overcame the snakemen. They were leery of what the next room might hold, but heard voices raised in blasphemous chanting, so knew they must hurry to save the girl.

Once they opened the next door, they knew they’d reached their destination, but also that at least some of them would not get out alive. 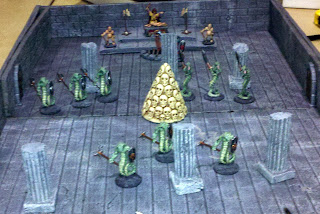 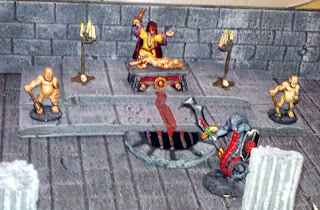 The snakemen tried slithering forward, but the temple seemed to too cold for their reptile blood (the snakes consistently rolled low movement rolls). 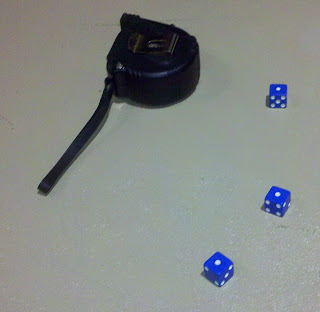 The party still had great difficulty dealing with so many snakemen at once.

Finally, Krognar had a brilliant idea (for a barbarian). Killing the priest would stop the ritual, so he rushed forward, weaving between the slithering attacks, and stuck the priest down in one blow. Unfortunately, Krognar brilliance hadn’t provided him an idea of what to do now that he faced the Naganator. 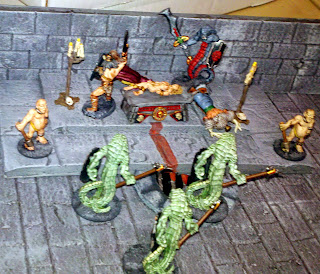 Krognar's dying attack held the Naganator off while Dave ran forward to release the magistrate’s daughter. 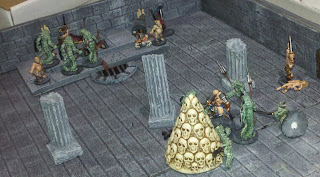 But remaining snakes were too much for the heroes and they were all cut down. So, in the end, the heroes were not only released from the magistrate’s jail, but the Snake cult also released them from the mortal coil.

The game was a lot of fun to run, largely because of the great players who got into spirit of the game.
Posted by Black Cavalier at 11:55 PM