Our recent local game convention fell on the 200th anniversary of the War of 1812 2nd Battle of Lacolle Mills, so I recreated it on the tabletop using Too Fat Lardies’ Sharp Practice rules.

The battle occurred at Lacolle, Quebec, near Lake Champlain, about 5 miles north of the modern US/Canadian border. A US force of 4000 bombarded a British held blockhouse, with the plan to assault it. The blockhouse was held by only 80 troops from the 13th (1st Somersetshire) Regiment of Foot. The British in the blockhouse held out valiantly, with Royal Marines firing Congreve Rockets back at the Americans, while a number of other units marched to their aid. 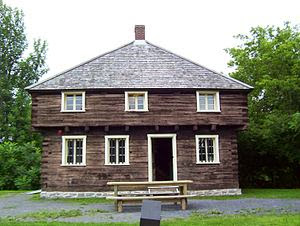 In my game, I set up the board with a “blockhouse complex" at the far end to draw the US players’ attention and told them the British were regrouping from unsuccessful attack on the artillery and to deploy expecting another attack from that direction. The US forces deployed evenly across their front, with this in mind.

But once deployed, as in the historical battle, the Canadian/Native Canadian forces appeared on their flank.

The Canadian force appeared piecemeal, & at random places along the flank, so their attack wasn’t completely coordinated. & once deployed, they used the woods as cover for most of the battle. The US forces were quickly spotted by the Canadians and forced to deploy off blinds.

A Canadian Fencibles unit and US Regular unit end up playing cat and mouse through most of the game. They spent many turns deployed in the forest, not rolling enough move close enough to come into contact with each other, so they just stood and fired volley after volley. (There are really supposed to be trees between them, but they were moved out of the way for ease measuring & movement.)

Finally, a Canadian unit made a break for the US artillery, but the US Rifles and other line units quickly turned their firepower on them and cut them down.

It was then the Canadians turn to return the favor. The 2 US units on the right flank that had been taking the brunt of the Canadian fire finally started to waver and fall back. 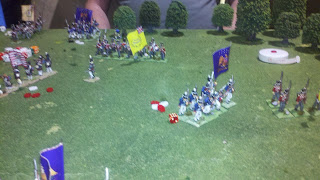 It was at this point that the Native Canadian allies made themselves felt. They played a bonus card to enable them to make an extra move, fired into the rear of the US Rifles causing significant Shock, and let loose a blood curdling War Cry (bonus card) which caused another wavering unit to break. 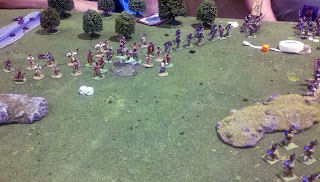 At this point, there were only 2 untouched US units with good morale between defending the artillery, with a number of healthy Canadian and Native Canadians bearing down on them, so we decided to call the game. 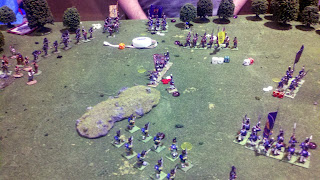 Everyone seemed to have fun, in spite of difficulties arising from my less than clear explaining these somewhat detailed rules. But now that everyone had a basic understanding of the game under their belts, they are all eager to try the rules again.

Historically, British gunboats moved upriver to fire on the Americans. The flank companies of the 13th were nearby and mounted an assault on the US artillery, but were driven back by sheer numbers. Finally, the Canadian Voltigeurs, the Gredadiers from the Canadian Fencibles, and Native American allies flanked the artillery position and caused many casualties to the artillery crews and command. Some accounts have this flanking force taking the guns and spiking them before being driven back.

Ultimately, the US heavy artillery was unable to deploy due to the soft ground, and the remaining artillery was not heavy enough to breech the blockhouse after hours of bombardment. The US attack was a complete failure and was yet another blank mark on the US commander’s military career.

Finally, here are the Canadian Voltigeurs conversions I did. Luckily, their later uniform was similar to the British Rifles uniform. So I only had to carve the epaulettes off their shoulders and putty up their shakos to turn them into the Voltigeurs' distinctive bearskin shakos. 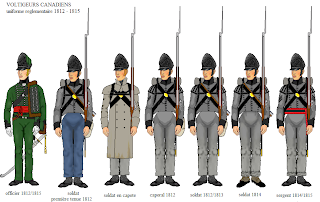 Posted by Black Cavalier at 1:22 PM