This was a game played at Dundracon in the San Francisco Bay Area over President's Day weekend. A friend & I have been pretty much fighting the exact same scenario with the exact same figures at this convention for about 4 years, but each year we try a different ruleset to see if we like it. So far we've tried We Could Be Heroes, Future War, & some others I don't remember. This year we used the Ganesha Games Flying Lead modern rules.

Since the most promenent terrain feature was a pile of tires, someone suggested to fight over a tire fire. The Chicks wanted to keep it burning, the
Slicks wanted to put it out.

Left half of the board 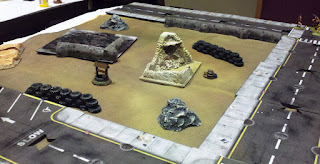 Right half of the board 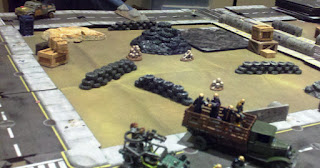 There was a central road that ran down the middle of the 2 halves. 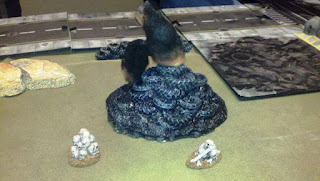 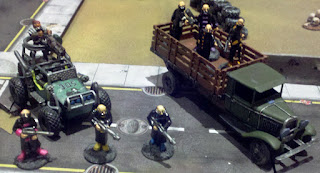 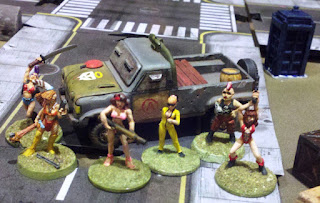 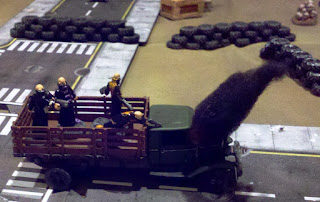 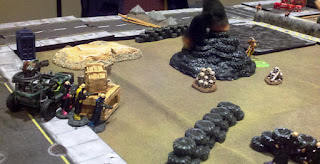 Melee chick triples a slicks combat score, making it a gruesome death. All the nearby Slicks fail their morale & run off. 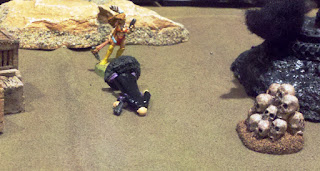 Final Showdownm the Chicks leader mesmerizes the Slicks with her impressive mohawk while the melee chick lops the head off the Slicks leader. Strangly, none of the other slicks seeme bothered by it & don't fail Morale. 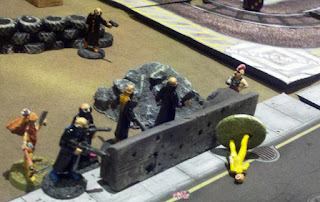 At this point, only the Slick's assault element was left & their short range weapons really didn't give them much chance to fight back, especially with the melee chick almost unbeatable.

The game was fun, but the rules seemed a bit too crunchy for something you'd expect from Ganesha Games. One problem could have been that each of the figures had it's own different set of skills & weapons, so we had to keep referring to our army list to figure out what skills & +/- needed to be added to the rolls. Also, this was our 1st game of Flying Lead, so we were consulting the rules alot.

But, for a more historical game, where there'd be a lot less individualality in the figures, I think it would work a lot better.

& finish to up with, I noticed that the dune buggy that the slicks command element used had the driver on the right side. I thought this was pretty hilarious so had to share. I got the buggy as part of a large lot of scifi figures, so I have no idea where it came from, but I figure it was somewhere in England or Australia. 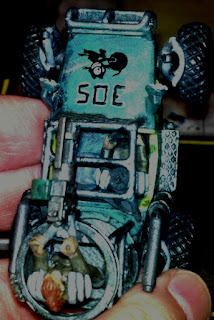