A few posts ago, I showed a church I had scratch built for Stange Aeons. I have now pretty much completed painting it up.

Instead of a steeple to hold some sort of emblem, I'm planning on painting a symbol on the wooden planks across the apex of the roof. I just haven't decided what to paint yet. 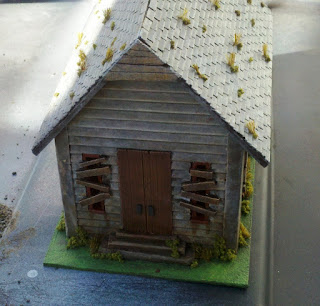 I know I was a bit heavy handed with the brown wash under the windows on this side. 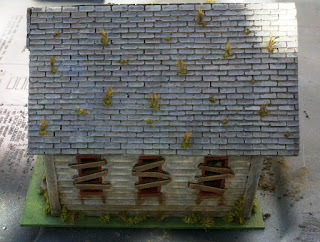 Yep, that's the back of a building. 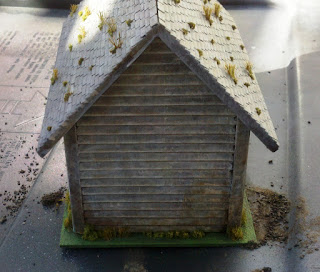 The mossy stuff on the roof & growing up the building is Underbrush from Woodland Scenics. Mason from Lead Adventure Forums used it on one of his buildings as ivy growth & I really liked it. It's a great way to make small growth in corners & around buildings. 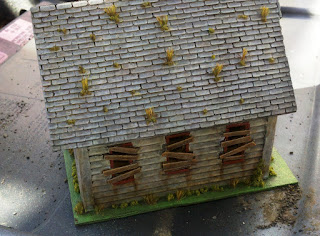 The inside turned out a lot yellower than I intended, I was trying for a pine look. The side walls are plastic sheet, & the brush marks left in the paint ended up making it look a little like wood grain after I applied a brown wash. 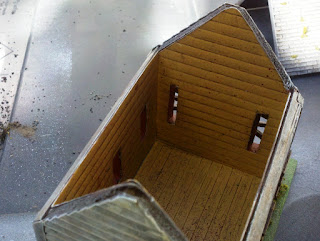 Father Edmund can get a little messy some times. 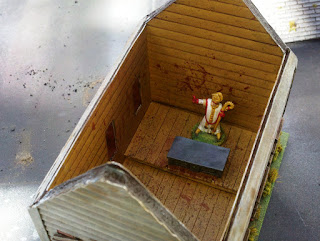 & a quick shot of the steps down to the larder. 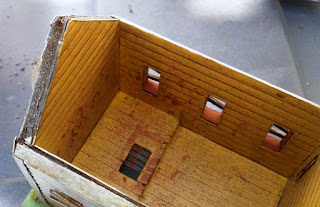 The interior dimensions of the building are pretty small, so I don't expect to do any actual gaming inside the church. But I'm very happy with how it come out, being my 1st attempt at a major scratch building project. I'm thinking there still needs to be some sort of symbol or mystic circle on the floor or wall behind the altar to finish the whole thing off.

I must say Skrapwelder helped out a lot. He gave me the resin roof & a lot of advice during the whole process.
Posted by Black Cavalier at 10:51 AM 5 comments:

I've posted before about my very talented friend Tom & his new Wooden Wars venture. He recently ran a Kickstater to help him buy a laser cutter & has started making large scale wooden figure flats. You can find his ongoing efforts at his Skull and Crown blog.

His intial efforts were to make Napoleonic soldiers, but he quickly expanded into Victorian colonials of the science fiction variety. I have just completed painting up the human infantry that were the backers rewards for his Kickstarter.

Here are the 4 regular infantry I have, all armed with the latest Tesla rifles. 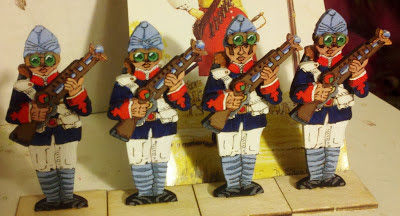 Unfortunately because I dont know how to properly use my camera phone, I either use no flash & get slightly blurry pictures that show the colors correctly... 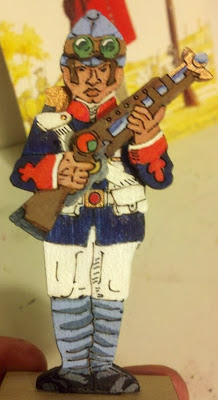 ...or I use the flash & get pictures in focus that are over exposed & make the colors look too light. 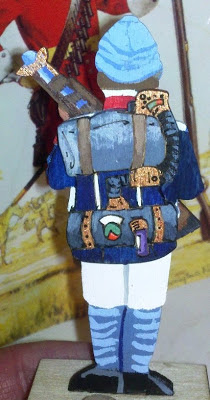 Here are the Steel Dragoons, mounted on mechanical dinosaur-like mounts. 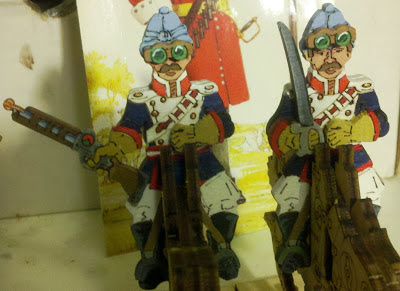 The dragoons carry the carbine version of the Tesla rifle. 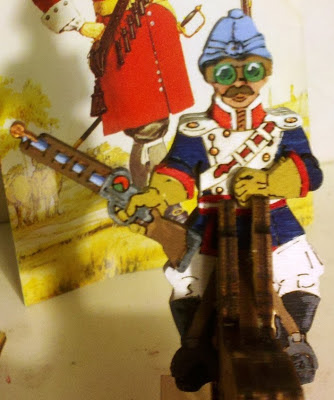 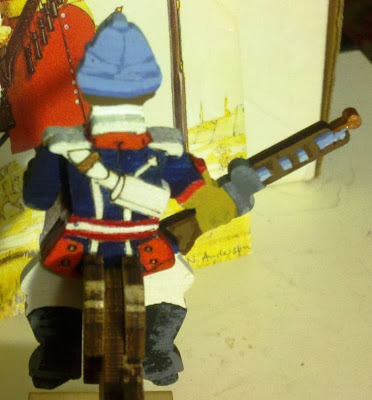 Here are the mounts with a slight customization. The large wrenchs actually came being held in a hand. I trimmed them down to fit "under" the saddle, since I figure the Dragoons won't always have mechanics around, so would need to be able to fix their own mounts.

& finally, the artillery crew for the Tesla Cannons. One of the nice things about these figures is that they come with many different arm options. I used an extra carbine arm from the Steel Dragoons to make the artillery guard figure on the left.

The pistol arm & holster from the crewman sprue allowed the the crewman figure to be changed into an officer. 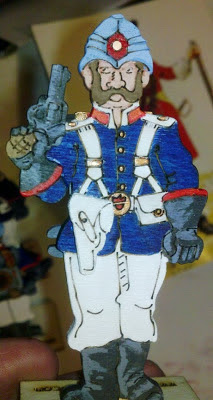 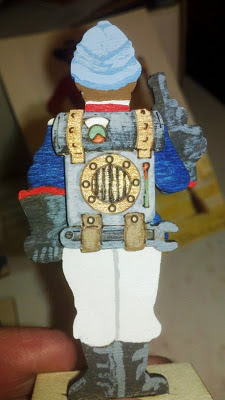 You might wonder what the shiny dot in the middle of the crewman’s pith helmet is. It’s a rare earth magnet that I added. 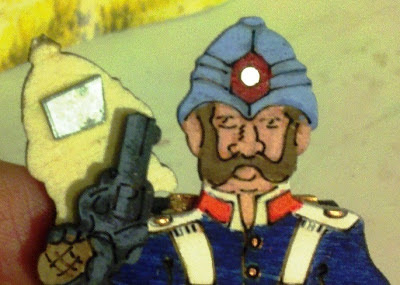 & here is the result. The officer & artillery guard are generic enough to be used in regular infantry units. But obviously with all the ionized air surrounding the Tesla Cannons, the crew would need to wear breathing apparatuses. So I wanted the gasmask to be removable. 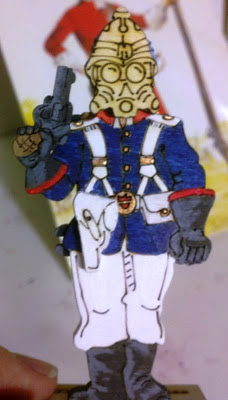 Unfortunately, the nicely formed disc isn’t on the other figures’ helmets, so it wouldn’t be as easy to put magnets on them. But you could definitely use the magnets to allow for arm swap outs.

They were lots of fun to paint & without meaning to, I ended up painting them up in a French Napoleonic color scheme.
Posted by Black Cavalier at 6:30 PM 3 comments: