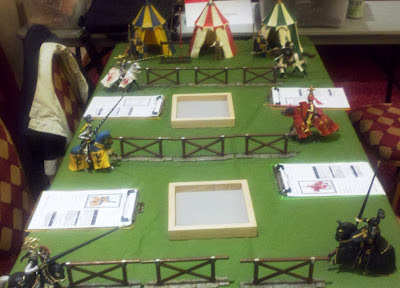 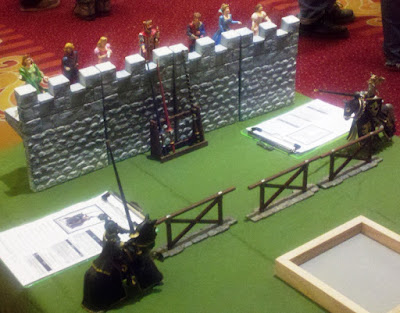 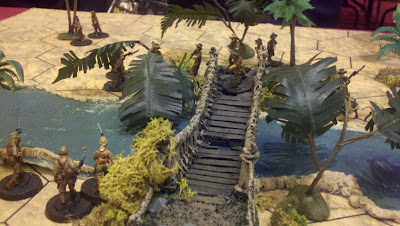 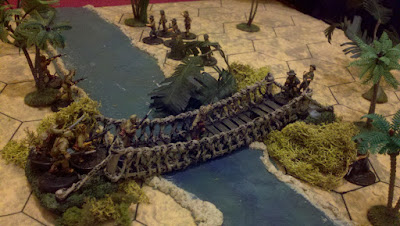 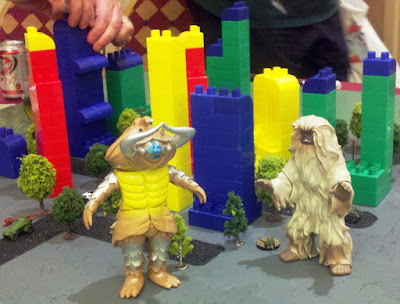 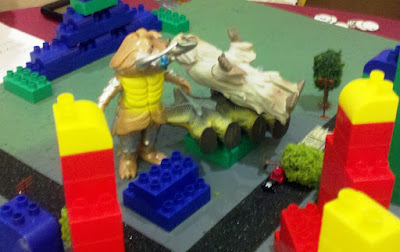 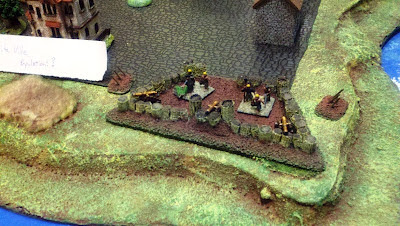 Overall, I was very impressed with the convention. In prior years, the convention seemed to be waning somewhat. Last year's attendance seemed to be down & they actually no longer had a vendors room. But this year, the number of gamers on Friday night seemed to be about the same number as Saturday’s numbers last year. & Saturday this year was packed. & they had an another overflow room because the Pirate game was so big. There were 4 vendors, one of which was demoing new generic skirmish wargame rules. & they had expanded hours on the convention food stand with somewhat reasonable prices & a few more healthy options. So I was glad to see the convnetion was doing well & will be looking forward to it next year.
Posted by Black Cavalier at 10:41 PM 2 comments:

At our local gaming convention, Conquest Sacramento, I ran some of Ganesha Games’ skirmish rules, Song of Blades & Heroes (fantasy) & Song of Drums & Shakos (Napoleonic). These rules tend to work best when played 1-on-1. So since I wanted to be able to have up to 6 people play at a time, I set up 3 1-on-1 games to be run in parallel.

There were 4 players that tried the fantasy games out. 3 of them only stayed to play 1 game, but 1 player decided to stay to try all 3. Everything went well, with the players picking up the rules quickly.

Viking Board
The 1st fantasy board was Viking themed. A Rus bandit gang had somehow enlisted the aid of a Giant which allowed them to pillage the countryside almost unhindered. The local Viking Jarl gathered his Hirdmen and Godi (magic user) to kill the Giant & drive off the gang. There were about the same number of Rus as there were Hirdmen, but the Hirdmen were hardened fighters while the gang was just some ruffians with a Giant to back them up. This was played with 28mm figures & was based on the Kill the Monster scenario from the SBH Arthurian suppliment. 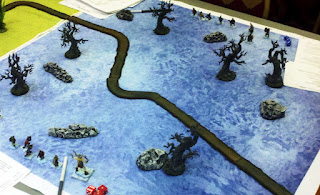 In the 1st game on this board, I played the Jarl & Hirdmen against one of my fellow local gaming club members.

My Hirdmen drive off a screen of his Rus. 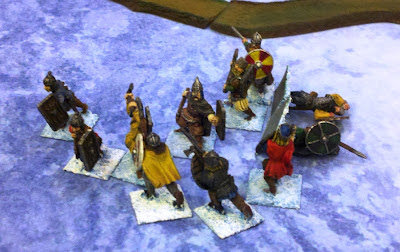 His Rus fall back under the protection of the giant. 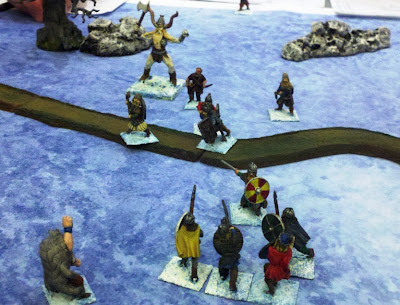 His giant lumbers forward as my Godi (in the wolf skin) tries to get a Transfix spell off on him. 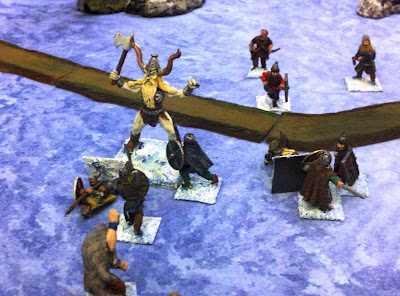 Even the battle experience of the Hirdmen was no match for a giant. The giant finally killed half of my warband, forcing a morale check & the Hirdmen runs off to lick their wounds.

In the 2nd game, I played the Hirdmen again. & again against another local club member (the one that played all 3 games). But this time, the Rus player's luck failed him. My Godi was able to root the giant to the ground with his spell, while my Hirdmen swarm him. A quick death followed and the rest of the Rus gang scattered. 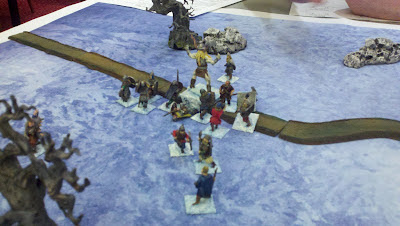 Beastman/Frogman Board
The 2nd fantasy board had Beastmen raiding a Frogman (Deep One) village. The Beastmen were trying to burn the Frogman huts. 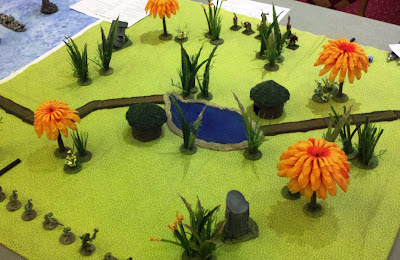 The Beastmen had the skills Forester (ignore brush & woods/jungle movement penalties) & Running Blow (didn’t have to stop to make an attack, but could keep on running by the target if the attack was successful).

The Frogmen had the Amphibious skill (move through water without penalty). This was also played in 28mm & was a simplified version of the Bridge Over MurkyWaters scenario from Ganesha Games' free online magazine Free Hack. Here is a battle report from a solo game I ran of the scenario which was my 1st SBH game.

The 1st game on this board was played between the local gamer who ended up playing all 3 fantasy boards & an out-of-town gamer. Here, the frogmen race to reach their homes before the beastmen. 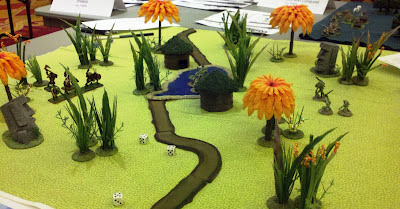 The frogmen defend their huts against the beastmen's torches. 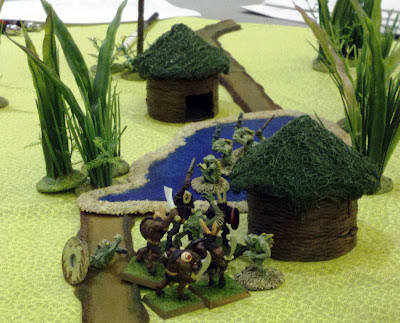 The beastman leader was finally killed which caused the rest of the warband to run off, saving the frogman huts.

Standard Bearer at the edge of the lake about to be attacked. 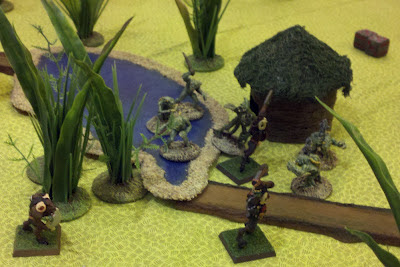 The leader failed so badly that he ran off the table. This caused a 2nd morale check for the remaining Frogmen, most of which also ran the table. The boy was ecstatic since this was the 1st convention he attended & he’d beaten his opponent so soundly. Both his father & grandfather came by to thank me for showing him such a good time & making his 1st convention memorable. In honor of the his 1st convention victory, I gave him one of the Beastman figures to keep.

The young beastman commander with his "goatee". 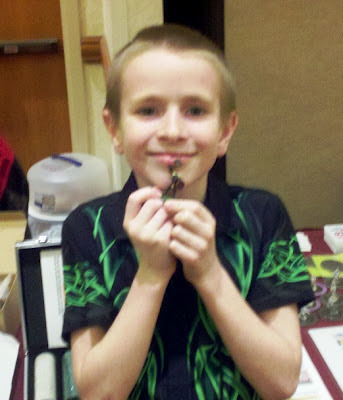 10mm Board
The final fantasy board had 2 medieval knight forces face off. It was played in 10mm using a single Games Workshop Warmaster stand to repalce a single 15mm figure. 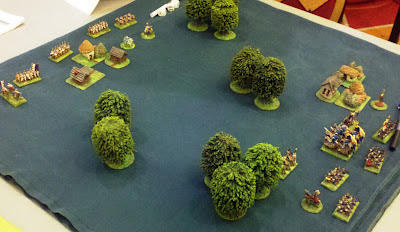 I was curious to see how the 10mm Warmaster stands would work as 15mm substitutes. The only problem is when a unit lost in combat & it needed to “fall down”. We put the whole stand on its back, which did look a little funny. But overall, they worked fine & the game look good. I’ll definitely be using them again since I have such a large Warmaster collection.

Here I played the blue Imperial forces facing off against the purple Bretonnian forces. 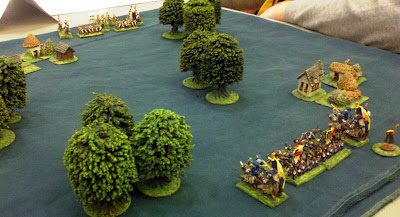 My forces move forward and try a flanking manauver. 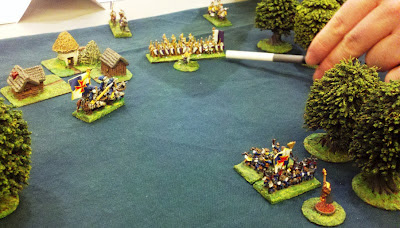 The Bretonnian Men-at-Arms provide doughty resistance against my knights.

The Bretonnian mounted squires wipe out my crossbowmen & follow up, contacting my Imperial halberdiers. Shortly after this, the Bretonnian Grail Knights thunder forward, destroying the halberdiers and then the Wizard, finally forcing the Imperials to run.

Napoleonic Games
After the fantasy games were done, I set up the 3 Napoleonic games. All of them were 28mm.

The 1st game was a simplified version of Blunt’s Pay Day, a scenario published in the Free Hack magazine, which itself was based Sgt Harper defending the pay chest against the French in the 1st Shapre’s Rifle book. But my version had Portuguese Cacadores (riflemen) defending the pay chests against French Line Infantry. 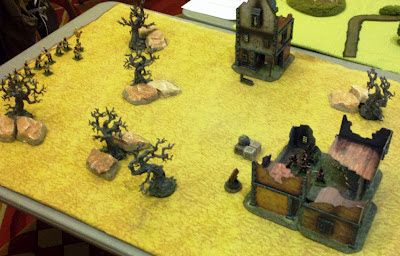 I ran the full Blunt's Pay Day at the local club a few months ago & here is a report on that game.

The other 2 games were from the War of 1812, so both had British vs American troops, & were on similar boards. 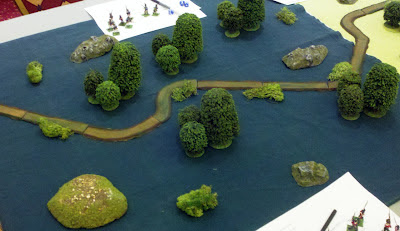 The final game was set in the Niagara campaign. A British commander was travelling to meet with a local Native chief to coordinate their efforts against the Americans. The commander brought 2 Canadian Glengarry Light Infantry with him, and the native chief had sent warriors to escort the British to the meeting place. A detachment from the US Regiment of Rifles were sent to intercept them & prevent the meeting. 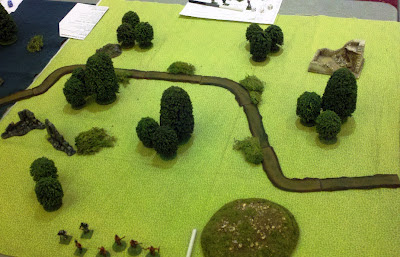 Here are the Glengarry Light Infantry and Native warriors I painted for the game.

There was only 1 player for the Napoleonic games, but it was not surprising since it was mid-afternoon on a Sunday, so the convention was winding down. We played the Chesapeake game. The player had already been interested in Ganesha Games & actually left another game early that he was playing in, in order to try out SDS. After we played the SDS game, he was planning on buying at least SDS & possibly Ganesha’s ACW Company level game, ‘61-‘65.

Here is my British seeing off his Americans after killing his Leader. 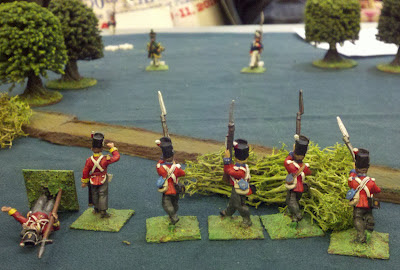 So overall, a very enjoyable afternoon teaching & playing some fun games. I had to laugh though when I was tearing down the games. One of our local club members was cursing my name when he saw that I had been running Song of Drums & Shako. He’d played in a game I’d run at the club a few months ago. & he was cursing me because I’d cost him too much money. He’d bought the SDS rules & then had to go out & buy figures for it. I guess that speaks well of the rules.
Posted by Black Cavalier at 8:56 PM 3 comments: