I've been working on a fantasy Viking army for probably over 10 years. My original intention was to use them as a Beastman army for Warhammer Fantasy Battle. But recently my gaming group has latched on to Kings of War by Mantic Games, which we believe to be a much better army scale fantasy game (at least in terms of the rules). So now I'm running them as the Kings of War Orc list.

I am now regularly playing with my Vikings for the 1st time. & I was getting a bit embarrassed by the painted figures not being completely based. So over the holiday break, I made a major push to base about 120 figures that were painted, & finish the movement trays I'd bought.

Here, in all its glory, is my fully based & trayed Viking army. 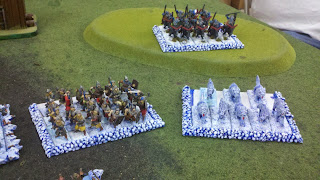 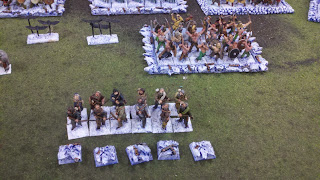 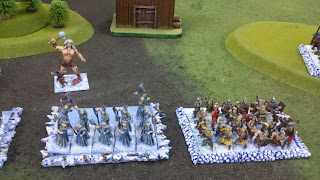 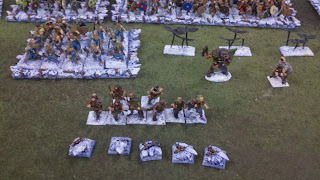 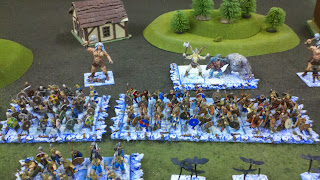 So, that's all my painted figures, completely based & all on movement trays, with 1 tray left over. The whole army comes out to be 2160 points as Kings of War Orcs. It'd be almost 2500 if I included magic items & turned some of the figures into an appropriate number of heroes & bannermen for this sized force.

While this is an awesome accomplishment that I'm very proud of, I have only finished off the already painted figures. I still have about another 70 infantry, 20 large monsters to use as trolls, 2 more giants, 10 more wolves, plus 3-4 character figures that need to be painted. So maybe I should make that my main project for 2015.
Posted by Black Cavalier at 12:04 PM